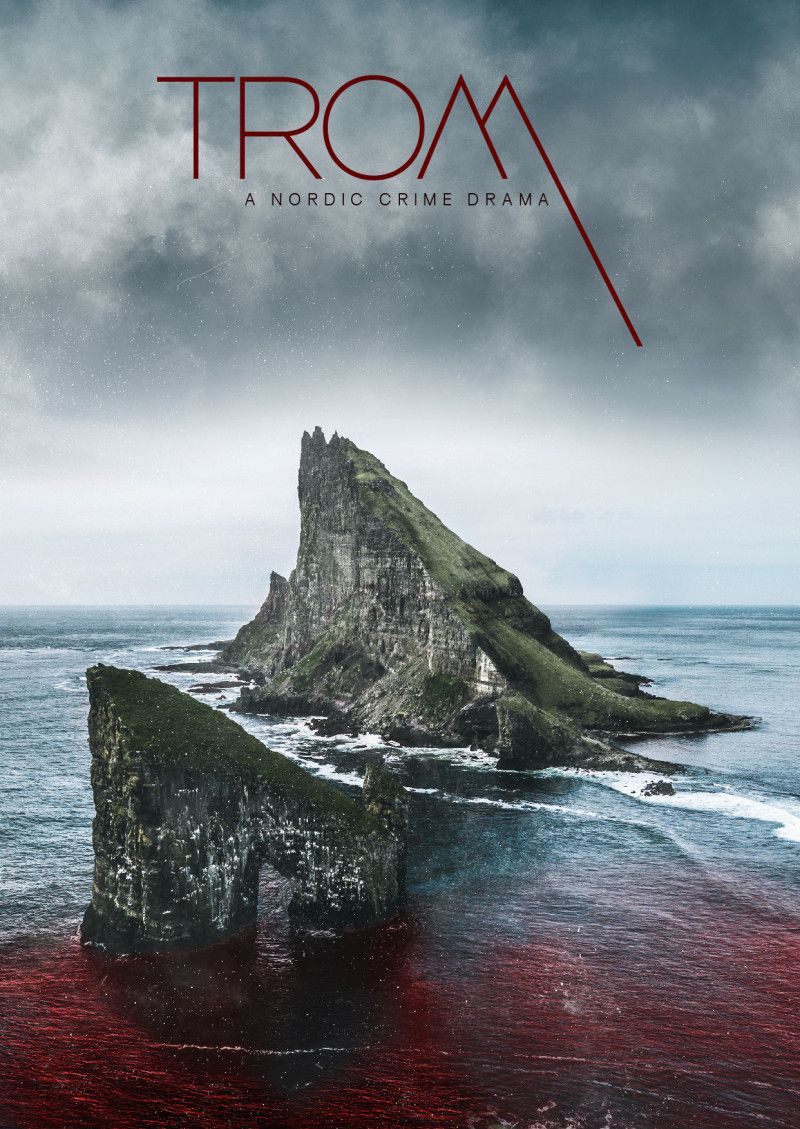 It’s good to see that the Faroe Islands have finally joined the Nordic noir scene! This weekend’s showing of the first episodes of Trom on BBC 4 really showcased the Faroese setting, with tiny rural settlements lashed by wind and rain, precipitous cliffs and pounding seas. And the resilient inhabitants going doggedly about their daily lives, dwarfed by the elements.

It is of course particularly exciting for Norvik Press that Jógvan Isaksen’s Walpurgis Tide, which we have published in translation, is one of the novels on which this series is based. Hannis Martinsson, Isaksen’s representative of the long line of amateur detectives who persist in solving crimes where the police are baffled, returns home to his native land after decades in Denmark, only to discover – and immediately lose – a daughter he did not know existed. Impelled to try to solve her murder, he embarks on an investigation which it is hinted will lead him to an international political conspiracy.

An extra dimension is provided in the dramatization by the use of Faroese actors in most of the parts. It is great to hear Faroese spoken here by native speakers – all except for Hannis and the police chief Karla, who speak Danish. A treat for linguists!

Where has the summer gone?! With the reading-hammocks being folded away and back-to-school beckoning, this week we’re highlighting two resources: our new ebook catalogue, and recommendations for university reading lists.

Hot off the (digital) press, our 2020 Ebook Catalogue collects together all the Norvik titles that are currently available for you to download and enjoy instantly on your Kindle or other e-reader device:

We hope to digitise more of our backlist in future, too.For those returning to campus – in-person, or remotely – we recommend some autumnal poetry: Hans Børli’s We Own the Forest: And Other Poems presents a dual-language text with facing-page English translations rendered by Louis A. Muinzer. This work by the ‘lumberjack poet’ – a phrase I’ve never had occasion to write before! – is ideal for Norwegian classes. Students of Finnish may also be interested in our forthcoming selection of poems by Pentti Saarikoski, A Window Left Open, jointly translated by Emily Jeremiah and Fleur Jeremiah and also in a dual-language format.

This week, we would like to draw attention to a blog written by Pardaad Chamsaz, Curator of Germanic Collections at the British Library, on the literature of the Faroe Islands: https://blogs.bl.uk/european/2020/04/this-grain-of-sand-is-nevertheless-a-whole-world-literature-of-the-faroes.html

The Faroes’ literary traditions are therefore both long-established and yet still novel; they are also both local and yet inextricably tied to Denmark and the wider world. These tensions have defined the distinctiveness of Faroese literature.  — Pardaad Chamsaz

If this has made you curious about Faroese literature, you may like to browse our two translations:

Jógvan Isaksen’s Walpurgis Tide, translated by John Keithsson and featuring a foreword by Dominic Hinde, is a thrilling slice of Faroese crime fiction. Two British environmental activists are discovered dead amongst the whale corpses after a whale-kill in Tórshavn. The detective Hannis Martinsson is asked to investigate by a representative of the organisation Guardians of the Sea – who shortly afterwards is killed when his private plane crashes. Suspicion falls on Faroese hunters, angry at persistent interference in their traditional whale hunt; but the investigation leads Martinsson to a much larger group of international vested interests, and the discovery of a plot which could devastate the whole country.

You can read a report of our book launch for Walpurgis Tide in a previous blog post here, and a review of it here. It’s a timely read, as this 2020 documentary by the BBC demonstrates.

Walpurgis Tide is available to order here, or as an eBook on Kindle here –perfect if you don’t want to wait for the post to arrive!

Originally written in Danish, Barbara was the only novel written by the Faroese author Jørgen-Frantz Jacobsen (1900–38), yet it quickly achieved international bestseller status and is still one of the best-loved classics of Danish and Faroese literature. This translation is by George Johnston.

On the face of it, Barbara appears to be a historical romance: it contains a story of passion in an exotic setting with overtones of semi-piracy; there is a powerful erotic element, an outsider who breaks up a marriage, a built-in inevitability resulting from Barbara’s own psychological make-up… everything you might desire in a page-turning love story! But Barbara stands as one of the most complex female characters in modern Scandinavian literature: beautiful, passionate, devoted, amoral and uncomprehending of her own tragedy. Jørgen-Frantz Jacobsen portrays her with fascinated devotion, and the ‘romance’ is in the vein of Daphne du Maurier’s darker tales.

Barbara is available to order here.

The Facebook page for the Representation of the Faroes in London shares further ideas for lockdown reading on a Faroese theme: https://www.facebook.com/faroesinlondon and the FarLit website has some recommendations for your reading list too: https://www.farlit.fo/

Scandinavia – a cold, bleak place with cold, bleak weather and cold, bleak people. A place to escape from. As well as the perfect setting for gruesome crimes. And where better to capture this foul ambience than in a hair-raising page-turner? Nordic noir has been a welcome escape route for many Scandinavians over the decades. Crime fiction makes up a large percentage of the total sales in Scandinavia and often tops the best-seller lists.

And once a year crime fiction turns into an elevated form of its own – påskekrim. It is something particularly Norwegian and a very specific type of crime fiction, namely the crime fiction read during Easter – påske – holidays. These crime novels are often published in order to reach the shelves just before the holidays, and they often tell stories set at Easter time. Påskekrim is a long-standing tradition for Norwegians when they head for their mountain cabins. Then they pack their little ryggsekks full of påske essentials, such as oranges, kvikk lunsjes, skis and ski poles, traditional board games and – most importantly – crime novels. Why? In order to scare themselves properly up there in the lonely mountains? The wind howls through the cracks of their old-style, wooden cabins which are only dimly lit by candlelight and an open fire, and each time any of them need to use the loo they have to risk death (by nature or at the hands of the violent murderers they have just read about) by staggering out into the nothingness to try to feel their way to the utedo. This life is highly appealing to Norwegians. They think it is the quintessential representation of hygge, and påskekrim plays a crucial part.

The reason why the term påskekrim exists is because of a specific crime novel published in 1923: Bergenstoget plyndret i natt! The translation of the title reads ‘The Train to Bergen robbed last night’. It takes place around Easter time and was published at Easter. It was written by two young, aspiring authors who were later to become some of Norway’s best known writers, Nordahl Grieg and Nils Lie. Grieg’s brother, Harald Grieg, was the head of Norway’s biggest publishing house, Gyldendal. He decided to run a campaign to promote the novel on the front pages of all the important newspapers in the country. So the public got quite a shock when they woke up to the alarming headline of the book title – with only a small, almost invisible indication underneath that it was an advert!

So whether you are going all-out Scandi and heading for the mountains, or prefer to stay at home tucked underneath a blanket, Easter time is the perfect time to escape into the mysterious bleak world of crime fiction.

Murder in the Dark sports a winning combination of engaging crime narrative and cool, unsentimental appraisal of Scandinavian society (as seen through the eyes of its shabby, unconventional anti-hero). There are elements of the book which now seem quite as relevant as when they were written, and like all the most accomplished writing in the Nordic Noir field, there is an acute and well-observed sense of place throughout the novel. The descriptions of Copenhagen channel the poetic sensibility which is the author’s own: “Copenhagen is at its most beautiful when seen out of a taxi at midnight, right at that magical moment when one day dies and another is born, and the printing presses are buzzing with the morning newspapers”.

Two British environmental activists are discovered dead amongst the whale corpses after a whale-kill in Tórshavn. The detective Hannis Martinsson is asked to investigate by a representative of the organisation Guardians of the Sea – who shortly afterwards is killed when his private plane crashes. Suspicion falls on Faroese hunters, angry at persistent interference in their traditional whale hunt; but the investigation leads Martinsson to a much larger group of international vested interests, and the discovery of a plot which could devastate the whole country.

And for a different kind of whodunnit, why not try

The Löwensköld Ring is the first volume of a trilogy originally published between 1925 and 1928. In addition to being a disturbing saga of revenge from beyond the grave, it is a tale of courageous, persistent women, with interesting narrative twists and a permeating sense of ambiguity. The potent ring of the title brings suffering and violent death in its wake and its spell continues from one generation to the next, as well as into the two subsequent novels in the trilogy: Charlotte Löwensköld and Anna Swärd. The Löwensköld trilogy was her last work of pure fiction, and is now considered a masterpiece.

Lastly, a future translation to look forward to