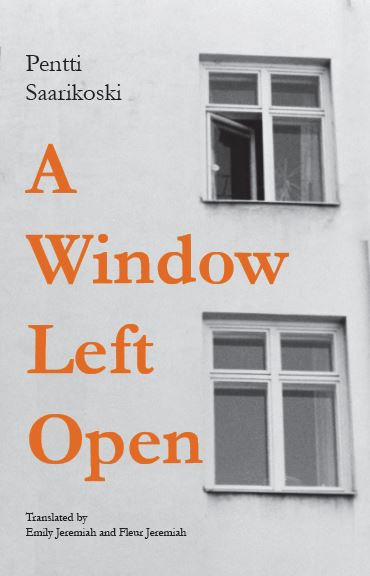 Pentti Saarikoski was a prolific translator and journalist, and a revered modernist poet central to the Finnish literary scene of the 1960s and 1970s. The inventiveness, warmth and humour of Saarikoski’s voice have made him something of a national treasure in Finland. His writing is at once playful and political, drawing on everyday life and current affairs, as well as Greek antiquity.

A Window Left Open collects poems chosen and translated by Emily Jeremiah and Fleur Jeremiah which chart Saarikoski’s artistic development over the decades from his early Greek period to his politically charged participative poetry, and ultimately his last known poem. This dual-language edition places the original Finnish poems side-by-side with their English translation, inviting readers to explore the elegant craftsmanship of Saarikoski’s use of language.

Pentti Saarikoski (1937–83) was born in Impilahti (today part of Russia) and died in Joensuu. He translated Homer’s Odyssey into Finnish and published his first collection, Runoja (Poems), in 1958. He developed his distinctive participative style in later collections and became a cult figure, partly because of his self-stylization as a Bohemian artist.

Emily Jeremiah is a writer, academic, and translator. She has published two selections of translated poetry, by Eeva-Liisa Manner and Sirkka Turkka, with Waterloo Press. She is also the author of two novellas, Blue Moments (Valley Press, 2020) and An Approach to Black (Reflex Press, forthcoming 2021).

Fleur Jeremiah is a native speaker of Finnish with wide experience in translating from Finnish across genres. She has collaborated with her daughter Emily on translations of modern Finnish poetry and of five novels, one of which, Aki Ollikainen’s White Hunger (Peirene Press), was longlisted for the Man Booker International Prize 2016.

A Window Left Open is available to buy here.