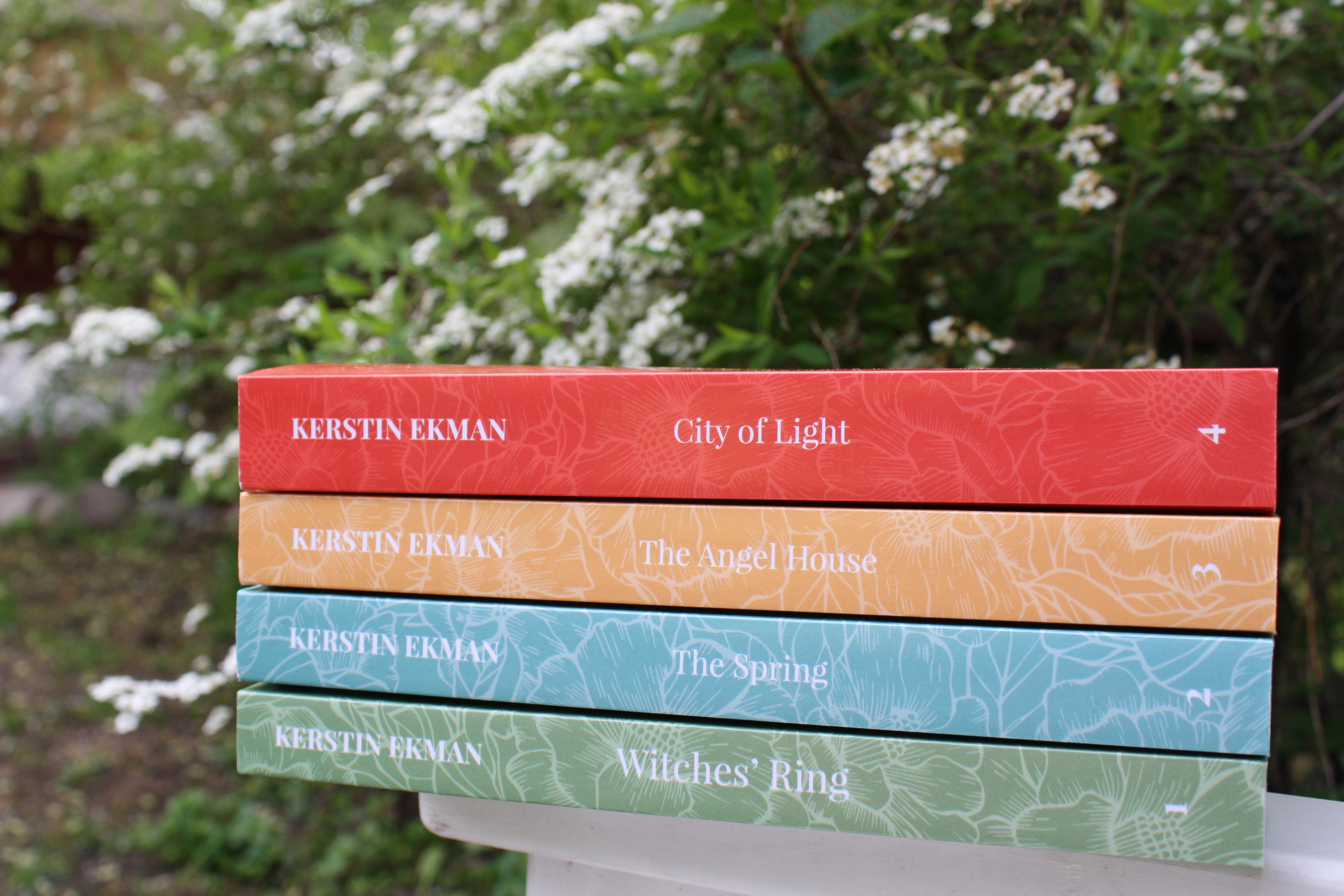 To mark the publication of our new editions of the Women and the City series, translator Linda Schenck offers her enthusiastic and personal perspective on the power of Ekman’s writing.

Witches’ Rings, The Spring, The Angel House and City of Light – my heart still quickens at the sight of this tetralogy by Kerstin Ekman on my bookshelf. What is it about them?

I was in my late twenties and early thirties when I read these books as they were being published (between 1974 and 1983, translations between 1997 and 2003), waiting with bated breath for the next volume. Very early on, I also knew that I aspired to translate them (I was just beginning to find my feet as a translator, a profession I have come to love and appreciate not least for the closeness it gives me to texts). Initially, I had a contract with a small press in the US to translate Witches’ Rings. This was in the years before computers were the tool of the trade. I typed my manuscript in duplicate, using carbon paper. At some point in the mid-1980s after I submitted my translation to the press and before there were proofs, the press went bottom up, taking my hopes of translation with it. For many years the carbon copy remained in my desk drawer, until Norvik Press agreed to publish first Witches’ Rings, and eventually the entire tetralogy. Sarah Death kindly agreed to translate The Angel House so the project could be expedited rather than dragged out over two or three additional years. And so by 2003 the entire tetralogy was finally available to English-language readers, two decades after its publication in Swedish.

A full adult lifetime (and translation career) later, this tetralogy still stands out to me as the greatest writing by a contemporary author it has been my privilege to make available in English. When people ask me what I would choose to translate, given a free hand, I answer without hesitation: the two volumes of Ekman’s later trilogy, known as the Wolfskin Trilogy: Sista rompan (The Last String) and Skraplotter (Scratchcards), which have not yet found a home in the world of English publications. (The first volume of the trilogy, God’s Mercy, is available in the European Women in Translation series published by the University of Nebraska Press: https://www.nebraskapress.unl.edu/bison-books/9780803224582/. The series was published in Swedish between 1999 and 2003.)

What makes these Women and the City books so unputdownable? What makes Ekman such an outstanding novelist? What makes these four books so universal, in spite of their extreme specificity of place? I had planned to leaf through them (for the first time in twenty years) in order to write this blogpost. I found myself unable to leaf, caught up once again in the narrative. Ekman has, quite simply, that amazing gift that only the greatest writers possess: an ability to combine structure, character depiction, theme and depth into stories that bite and burn, but also with wonderful humorous twists.

The four novels span an entire century, beginning in the early 1870s, a hundred-year period marked by the arrival of the railroad at one end and the chaotic advent of the global village at the other, all from the point of view of women and their work. As a reader, my heart goes out to each woman. Let me simply introduce some of them with a few words, and a quotation from the books. The first is Sara Sabina Lans, “gray as a rat, poor as a louse, pouchy and lean as a vixen in summer” and Witches’ Rings mainly follows her reasonably long life, then the very short life of her daughter Edla – “The innkeeper took Edla into service, not officially as a proper housemaid, of course, since she was only thirteen and a half years old…” – and then focuses on Edla’s daughter Tora: “Tora Lans was fifteen years old when she went to Meadowlands. She was strong and built for work, as her grandmother had said”. Edla died giving birth to Tora before she was fourteen. Tora was raised by her grandmother, Sara Sabina Lans. When The Spring opens, Tora is a widow at twenty-seven, with two toddlers and an earlier son given up for adoption. By the middle of The Spring (which encompasses World War I) she is in her mid-fifties, still laboring to make ends meet, and by the end of The Angel House she is dying and World War II has come and gone (“It seemed…that the illness and death casting a shadow over her short, windswept autumnal days made her doubly eager to teach them the art of survival”). She and her neighbor and close friend Frida, thirteen years Tora’s senior, have moved up in the world, to the extent that Tora now owns one of the local tea rooms and Frida has employment at the local laundry rather than going to people’s homes to do their washing. (“Frida was born in 1863. That was the year the number of out-of-wedlock children in the parish doubled, the year after the western branch of the railway was completed… That was nearly sixty years back. Occasionally she was tempted to say to Tora, ‘Your mother and I were classmates. We were the same age and would have done our catechism together’. But Tora’s mother didn’t live to be confirmed”). Their children are adults now, with the exception of Ingrid, Frida’s “accident” from the period of the great strike of 1909, whose life has mainly been spent fostered out into care, but for whom Tora has always played a decisive role. Ingrid gradually becomes a main figure of The Angel House, a working woman with a child of her own. (“What are these attacks of exhaustion and crying and abandonment and hysteria? Will I ever understand? This feeling that life’s got too hard and the demands have multiplied and there’s work, nothing but work, poking its grey snout up wherever I look…”). Towards the end we are introduced to Ann-Marie (“She wasn’t Fredrik and Jenny’s little girl, but the daughter of an inventor Fredrik had got to know… Ann-Marie had no mother”).

When City of Light opens, Ann-Marie is a middle-aged woman who has returned from Portugal, where she lives, to sell her alcoholic father’s house after his death. She hopes to make quick work of the whole affair, but her return to Sweden coupled with the disappearance of her teenage daughter provokes a deep depression and a soul-searching journey. So, from the 1870s, when Sara Sabina Lans’ lot was a life of mainly physical labor, the reader has moved forward a century, to the 1970s and a mainly psychological focus. In City of Light the exploration uses myth, religion and philosophy, all hallmarks of the late twentieth century, to continue posing the core question of the tetralogy: what is the life of a woman? (As the narrator tells us: “We all drag a cloud of causes behind us”).

Maria Schottenius, a Swedish writer and Ekman scholar, concludes her foreword to the 2003 translation of City of Light with a short paragraph that to me perfectly sums up the entire experience of reading the Women and the City tetralogy: “This is no innocent work of literature. It has a powerful story to tell. And a unique way of telling it”.

I deeply hope that twenty-first century readers will be tempted to delve into these stories. In my view they offer an incomparable overview of both personal and community life from the 1860s through to nearly the end of the twentieth century. Sadly, as I write this, in 2021, a year into the pandemic with no end in sight and vaccines being hoarded by the wealthy western world with no concern for the rest of the world, Ekman’s indication of where the world was heading seems nothing less than prophetic.

A concluding anecdote: the cover of the first edition of Witches’ Rings was quite upsetting to me, as it so poorly reflected the content of novel, which highlights the wonders of the railroad and much of the modernization that came to budding urban areas in its wake. It was a photo of an extremely dilapidated railroad station. The book received an excellent fine review in Kirkus Reviews (November 15, 1997): “…a fine novel that honors, as it emulates, the tradition of village fiction created by such earlier Scandinavian masters as Selma Lagerlöf and Knut Hamsun. It’s wonderful stuff.”  And so I finally broached the subject of the cover with Kerstin Ekman herself. Her reply reflected her usual aplomb: “Indeed, the child we share seems to have gone out into the world in tatters, but in fact she is doing fine out there.” My relief was enormous. And I find the new 2021 cover both extremely attractive and eminently suitable!